It’s been a while since measurement invariance alignment has been introduced in 2014, but not that many researchers applied it in practice. Among ~200 citations (as of May 2019) of the original alignment paper there were only a few substantive applications. It is a pity because you can always enjoy more optimistic results with alignment as compared to the conventional (frequentist, exact) measurement invariance techniques. I guess, it’s been happening due to statistical complexity and a lack of simple guidelines. In this post I summarized, in an approachable way, the steps that are necessary to apply alignment procedure. In addition, I provide couple of  R functions which automate preparation of Mplus code and extraction of useful information from the outputs.

END_OF_DOCUMENT_TOKEN_TO_BE_REPLACED

Imagine a person who has been raised religious, always goes to church every Sunday, and prays every day before sleep. Imagine also that this particular person is also strongly against abortion. A typical longitudinal study would measure her religiosity and her attitudes toward abortion multiple times during, say, five years, and then test if there is a correlation between change in a level of religiosity and change in a level of the attitude. If the person’s religiosity hasn’t changed, the classic longitudinal study would efficiently estimate zero relations between these variables because one of them is constant. The fact that religiosity has been constantly high for five years by no means implies it doesn’t influence attitudes. My point is that the longitudinal study might detect relations between variables that change, and totally useless when it faces no within-individual change. Therefore, within-individual designs aren’t almighty in discovering within-individual processes. In my example, a between-individual design is the only way to find out about what might be going on within an individual. We would see that more religious individuals are less in favor of abortions, and may theorize that a constantly high level of religiosity leads to a constantly negative attitude to abortion.

Following Judea Pearl, in order to make a valid conclusion, we have to overcome a mere observation of associations (which he treats as a lowest level of inference). To be able to make valid inferences,  we have to imagine and reason the counterfactuals, i.e. the events that have not happened.  In my example, the person’s low level of religiosity is counterfactual, but we can infer what would happen if it were the case – and the only way to do this is to use cross-sectional, between-individual data.
As I noticed above, within-individual designs are limited to features that change. My guess is that more stable features of person and personality (such as values, personality traits, gender, social class) tend to affect behavior and attitudes in much much higher degree than characteristics that change. Indeed, important things don’t change fast, that’s why they are important! Therefore, between-individual studies might well be even more powerful than within-individual studies in discovering and explaining within-individual processes.

These limitations of within-individual designs apply to surveys as well as to experiments; additional limitation of experiments is that we cannot manipulate most of things, and those we actually can aren’t very powerful forces.

Of course, we have to have in mind that between-individual designs describe first of all between-individual differences, and only with some serious assumptions (which we have to explicate and reflect on) they may suggest a course of within-individual processes. The main assumption here is that a sample of individuals represents a sample of states of a single individual.  Whether this assumption is reasonable or not is subject to discuss, but we shouldn’t blindly deny the use of cross-sectional designs in studying within-person processes. It might be a substantively driven decision in studies of within-person processes, going beyond organizational concerns.

Since 2008 I draw Schwartz value theory in a form of circle unaccountable number of times, and there were very different versions, with more or fewer circles inside, in different languages and with different emphases. I used PowerPoint, Word, Excel, Paint, even Photoshop once. Here is not the optimal but quite universal and customizable solution.
UPD. Now it’s a function schwartz_circle() in my R package LittleHelpers.
END_OF_DOCUMENT_TOKEN_TO_BE_REPLACED

Here are three little functions that allow for brunching logical pipes as defined in magrittr package. It is against Hadley’s idea, as pipes are in principle linear, and in general I agree, but sometimes it would be comfy to ramify pipes away. It overcomes native magrittr %T>% by allowing more than one step after cutting the pipe.
Imagine you need to create a list with means, correlations, and regression results. And you like to do it in one single pipe. In general, it is not possible, and you’ll have to start a second pipe, probably doing some redundant computations.
Here is an example that allows it: 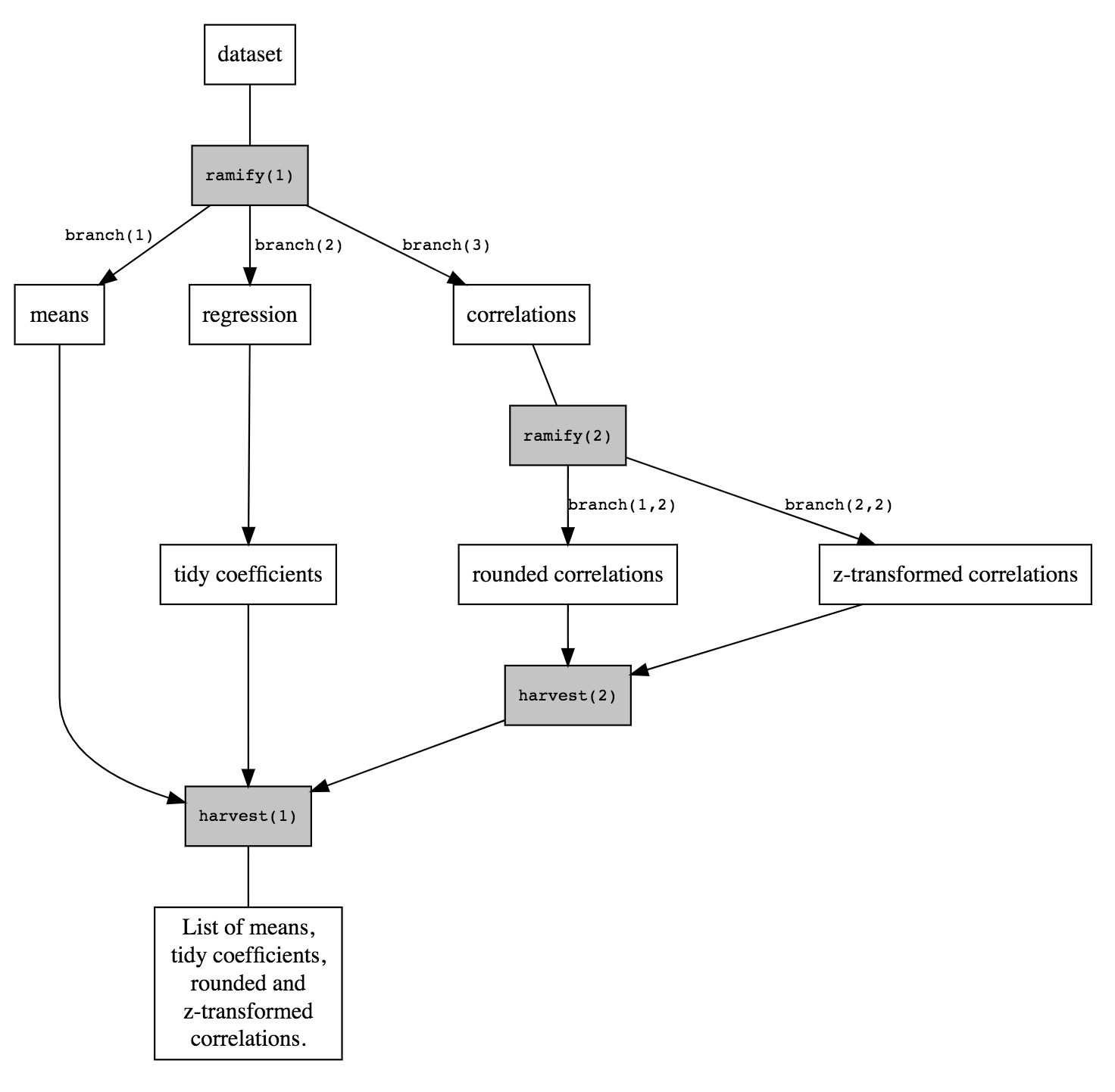 “Pipes are fundamentally linear and expressing complex relationships with them will typically yield confusing code.”
http://r4ds.had.co.nz/pipes.html#when-not-to-use-the-pipe

savengo is ridiculously simple but potentially useful function that saves objects from a middle of your pipe and passes the same object to further elements of the pipe. It allows more efficient debugging and less confusing code, in which you don’t have to interrupt your pipe every time you need to save an output.
Its sister function appendngo appends an intermediary product to an existing list or a vector.
By analogy, one can create whatever storing function they need.

Yes, there is a recently published brand new R package ess for downloading European social survey data, I tried it, although at this point it is quite limited.
What are the good sides of ess package?

What’s not so good?

So, I thought it would be useful to have a customizable function (instead of package) to do the same thing, but better. For example, you can keep labels to use, for example, with my label_book.

Don’t put more than one country or more than one round – it won’t work. For countries, use iso2c codes, or “all”. This function will expire when ESS updates its data versions, but it happens about twice a year, and can be fixed manually.

END_OF_DOCUMENT_TOKEN_TO_BE_REPLACED

Sometimes, when you explore a new dataset, variable names don’t make much sense. In SPSS you would just look at the labels, in R it’s not that straightforward: checking codebooks all the time is tedious, reading a questionnaire and trying to guess which variable corresponds to each question is even less reliable. If your data has labels as attributes, or you have read .sav datafile into R with haven or foreign package, it would be handy to have a searchable table of all the variable and value labels in the dataset. I looked it up and didn’t find such a function, so I have written a little simple function myself.

UPD. Now this function is a part of my R package LittleHelpers.
END_OF_DOCUMENT_TOKEN_TO_BE_REPLACED

After I have conducted the same kind of descriptive statistics for the thousandth time I realized the world needs a simple tool to explore value levels across years and countries.
The tool is purely exploratory, don’t forget about comparability and measurement invariance problems. My website is hosted by WordPress which sucks in embedding stuff, so you have to click the link:
http://apps.maksimrudnev.com:3838/shiny_values/
There are three tabs to explore trends by country, which allows comparison of value trends within each country, by value – to compare countries, and value map to see all the countries as points in the space of two higher order value dimensions. Point you mouse at country point on the value map to see how they moved during the measurement period.
Below are some screenshots. 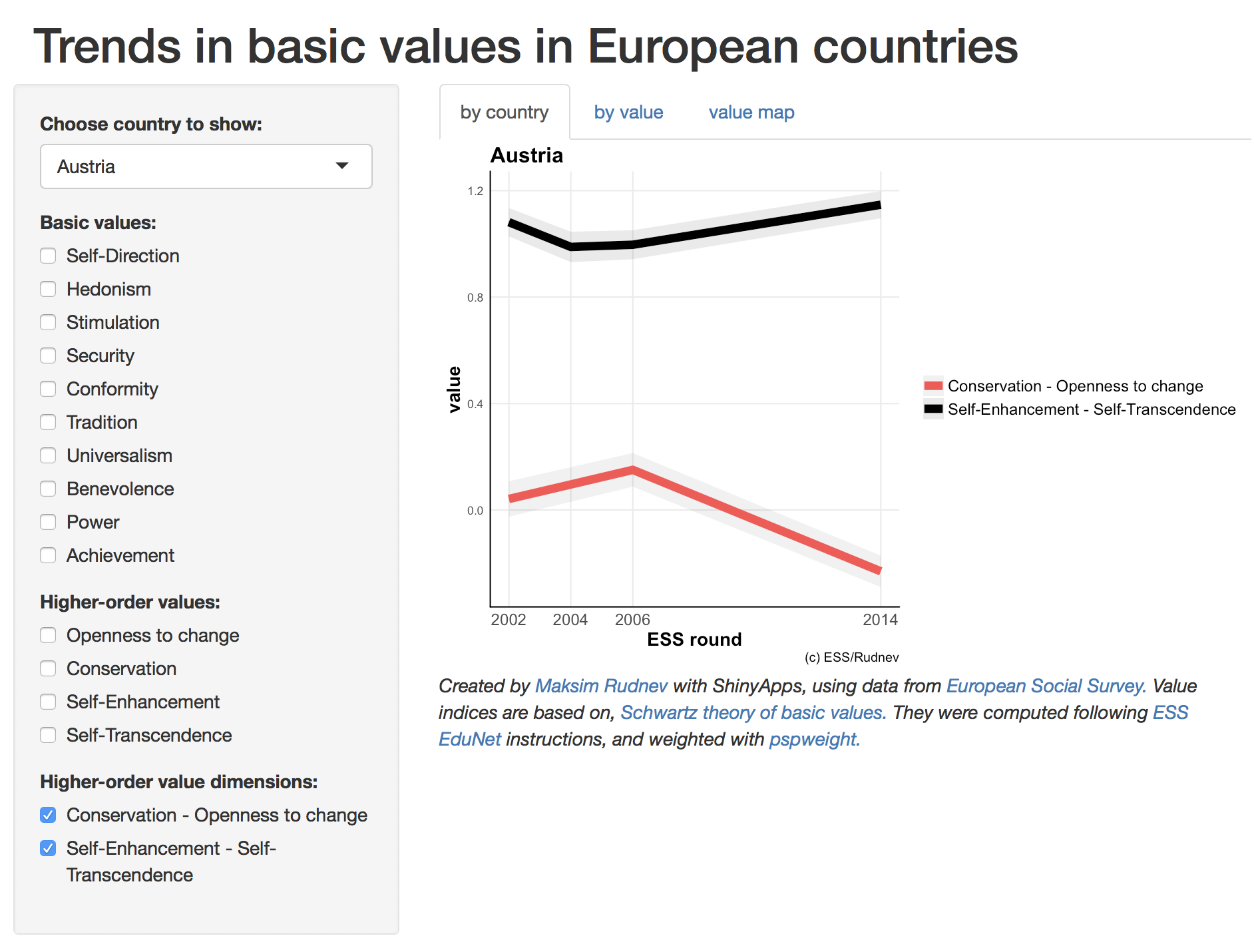 END_OF_DOCUMENT_TOKEN_TO_BE_REPLACED

There is one great thing about medical and epidemiological research – declaration of the conflicts of interest.  Medical researchers, usually before they actually present any research results, declare that they are not biased by financing or obligations to pharmaceutical companies, to producers of devices, commercially promoted ways of treatment, or anything like this.
However, social scientists do not bother with such nuance. Not-so-smart ones would claim they try to be objective. Smart ones would say: “Of course we’re biased”, but would never reflect in their articles in which way (and editors would not accept such papers). Given the neo-positivist ethos of the leading journals in sociology and social psychology, conflict of interest  (or researcher’s personal bias) can undermine many conclusions without even acknowledging it. Especially when a researcher has so many degrees of freedom. It looks totally outdated, as if we haven’t had all these anti- and post-positivisms, or critical theory.  Haven’t every reader thought about comparing consistent results of some prominent scholars of, for example, values and moral attitudes with their personal views? We can try to avoid this bias statistically, but we cannot easily reshape the way we think, so the least we can do is a declaration of researcher’s personal opinions added to every article. Of course, this is a very personal stuff, but I think it would greatly amend a positivist pathos of many, many articles.

There is a great new book on the market about basic values. For academics, it’s a new point of reference after a long time (for me it was Hitlin & Piliavin, 2004). It’s also great for newbies and anyone who’s just developed their interest in basic values. It sorts things out about what values are, what they depend on, what they can influence, whether they change, or can be manipulated. Gregory Maio did a great job in summarising much of the recent studies.
CONTENTS
The Problem of Human Values.
Section 1: Beginnings in the Empirical Study of Human Values
1. A brief history of values
2. Types of values.
Section 2: Values in Psychology
3. Connections to motives, traits, and habits
4. Connections to ideology and attitudes
5. Components of values.
Section 3: Forces that Shape Values
6. Personal influences on Values
7. Social influences on Values.
Section 4: When and how values matter
8. Effects on prejudice and well-being
9. When values matter
10. How values matter.
https://www.routledge.com/The-Psychology-of…/…/9781841693576